It’s been said for a long time the Puerto Vallarta is a natural ‘hurricane hole,’ a harbor offering mariners protection from the severe storms that are generated in summer months over the warm Pacific waters.  The old town PV is nestled in the south-eastern corner of Banderas Bay, just at the base of tail end of the Sierra Madres mountain range.  That range extends some 20 miles seaward along the southern shore of the Bay, so when tropical storms generate down south and work their way northward, that range presents a natural barrier. 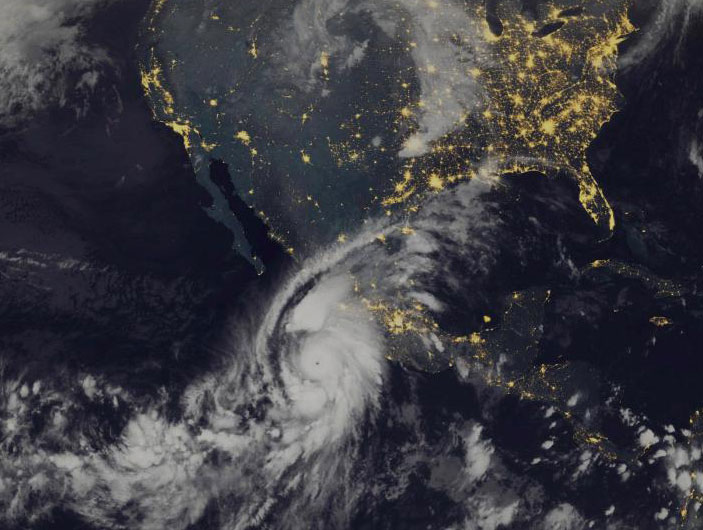 I have to say that when the strongest hurricane ever recorded was spinning our way a couple days ago, all my knowledge of the unique characteristics of PV were of little comfort.  Just look at the size of the thing in the photo above.  So the town braced, as a storm packing 200 mph winds zeroed in on the coastline.  CFE, the power company, was staging trucks and crews waiting for the chaos.  The federal and local police had convoys on standby.  Shopping centers and stores were all closed and boarded.  The resorts were evacuated, the airports closed.  And in the marinas, docklines were doubled, and then tripled.

But if anyone had any question as to the security of Puerto Vallarta as a top notch haven, well, let’s just get rid of those.  By 10 pm, well after the storm center had made landfall some 50 miles south of us, the most we had seen was maybe – maybe – 15 knots.  And I’m probably exaggerating.  Most of the evening was calm, really calm.  True, we had a steady diet of moderate rain, but that was about it.  Seriously.  The strongest hurricane ever recorded was 50 miles away, and we didn’t have enough breeze to go windsurfing?

Our sympathies go out to our friends to the south in Barra de Navidad and other areas that had some property damages reported…  but amazingly no casualties have been reported as of the time of this writing.  So yea to that.

The one good thing is that Patricia seems to have broken the summer heat.  Temperatures in PV are moderating, and as hurricane season comes to a (roaring) close, the sailing season is ready to kick in!  Our J/80s are in the water (I know, I know, bad timing!) and ready to roll….  let’s go sailing!

Wayne Zittel and the J/World  Team

This is going to be a short report as well.  There are some excellent summaries of the regatta already circulating.  As for J/World, we had three boats entered in 2015 J/70 North American Championships in San Diego, and three coaches involved with various teams.  As you might expect in a hotly contested one-design fleet with some 50 boats on the line, ALL the racing was tight.  Seriously, this was way too much fun.  The boats are mostly straightforward, so the big gains and losses are from tactical decisions, strategic plays, and – of course – just sailing the boat to it’s potential!  The three F’s of doing well (no, THAT’s not one of them…):  Focus, Focus, and Focus…

We have been sailing a lot of J/70s lately and are excited about the class.  We have two boats available in San Francisco, and two more in San Diego.  Qualified teams can charter the boats for West Coast events, and J/World is conducting occasional J/70 clinics (visit here for more info).   Of course, we also offer private coaching services, so if you are really looking to get up to speed in this highly competitive fleet, we can assist in jump starting your program.

Hey all, I know it’s a bit late, but the past month has been completely hectic. So now I’m going to catch up.

First off, let’s cover the St. Francis Big Boat Series.  I was fortunate enough to sail with a great group aboard a pretty new J/88.  This is a new and quickly growing fleet, and it was pretty cool to see four boats tied up along the same dock in Sausalito!  As most of the programs are new and still developing out full teams (a couple of the guys are doing a lot of shorthanded events), two of the owners joined forces to do this first Big Boat Series as a learning program.  And a third new owner who just took delivery of his own boat (too late to get ready for BBS) joined us for Friday.  So we had 2-3 J/88 owners aboard and shuffled crew around a bit.  I think the gang learned a ton and I was really impressed with the improvement.  It’s also fun to be a part of such an enthusiastic and cooperative fleet, and I expect great things.  Stay on the lookout for a J/88 clinic in SF  this winter or next Spring!

And a big shout-out to Gary Panariello on the other J/88 in the regatta:  backed by a J/World team from our Annapolis office, they had the boat pretty dialed and tied for second in class (lost the tie breaker to end up in third). 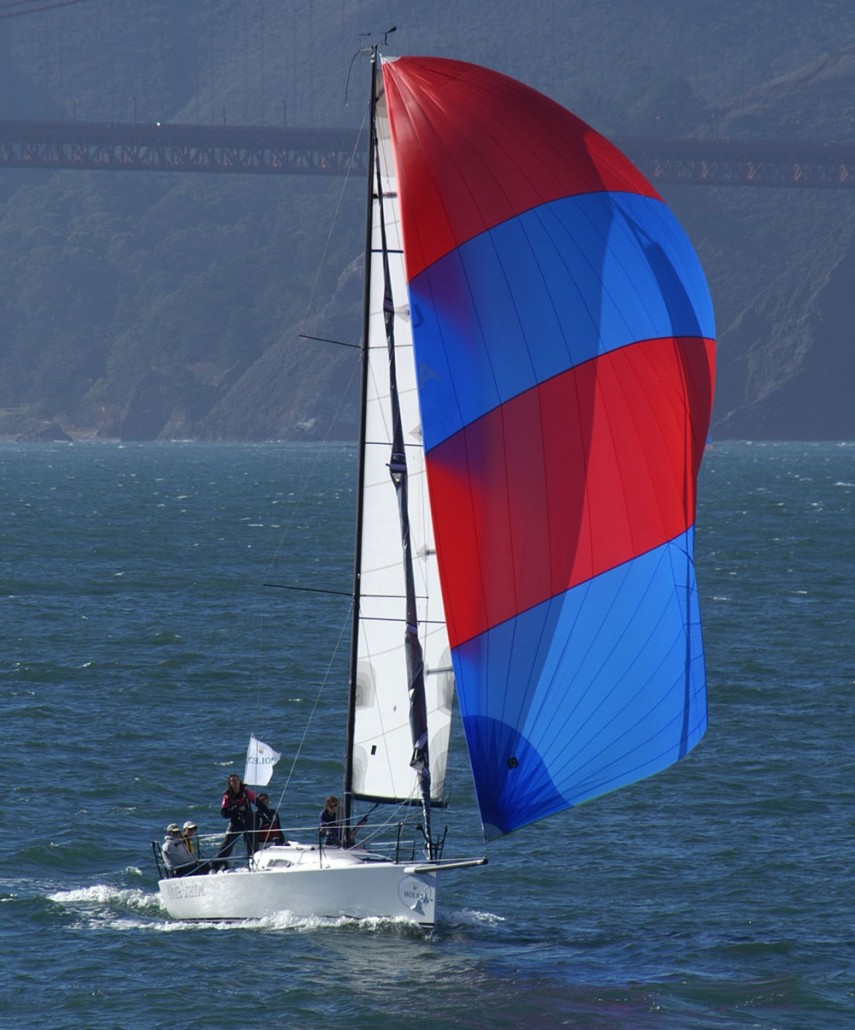 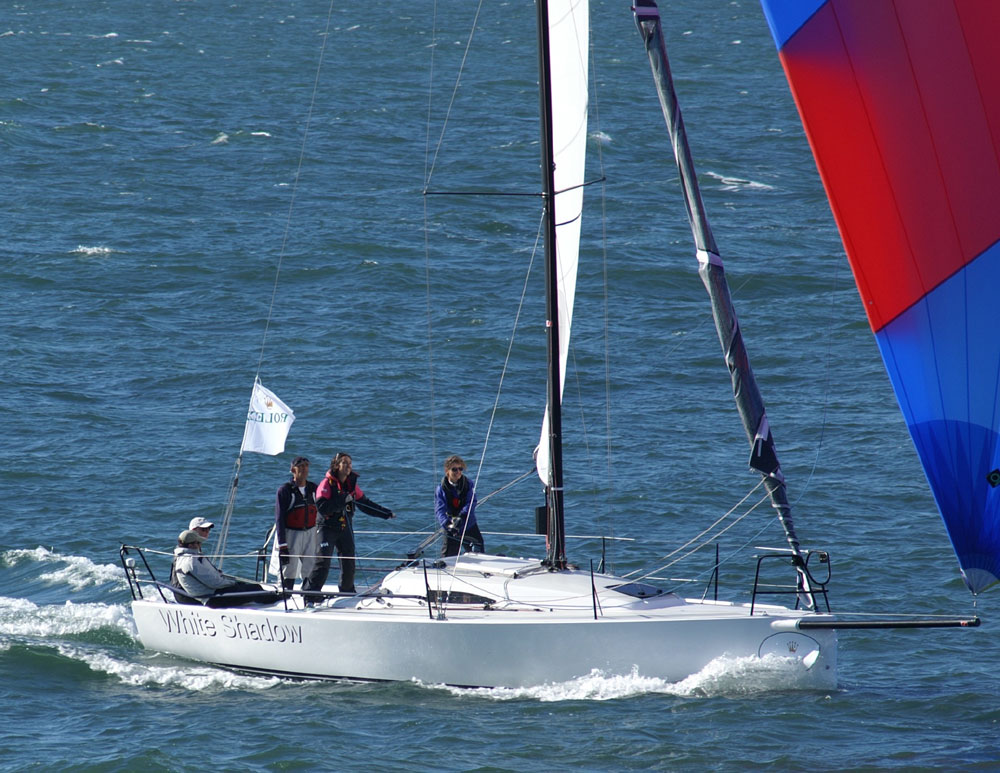 As you might guess from the above photos, it was a pretty mild BBS.  A couple of days had racing postponed waiting for the breeze to fill.  But the nice weather and fun racing made up for that, and the San Francisco wind machine did it’s thing enough to let us light up the J/88 a couple times.  Good stuff!

Ok, that’s the short version of the Big Boat Series….   next up:  the J/70 North Americans!