Ok, I have to apologize for not getting a final report off to you all on the final day of the 2016 Pac Cup.  I usually like to write an event summary on the way to the finish line, but we were a bit busy this time.  The title of the post says it all.  Our J/World Team aboard Hula Girl was able to secure a first place in our class and second place overall in the ORR division (only being beaten by the Andrews 70 Pyewacket.  Not only that, but as far as we can tell, we think we set a new SC50 record to Hawaii…  I *believe* Horizon set the bar in the 2010 Pac Cup with 8 days, 11 hours, 46 minutes.  Our time this year:  7 days, 20 hours, 3 minutes.  Could it be that we are the only SC50 to ever have made the trip in less than 8 days??  I’ll defer to the SC50 historians for ratification, but it seems so. 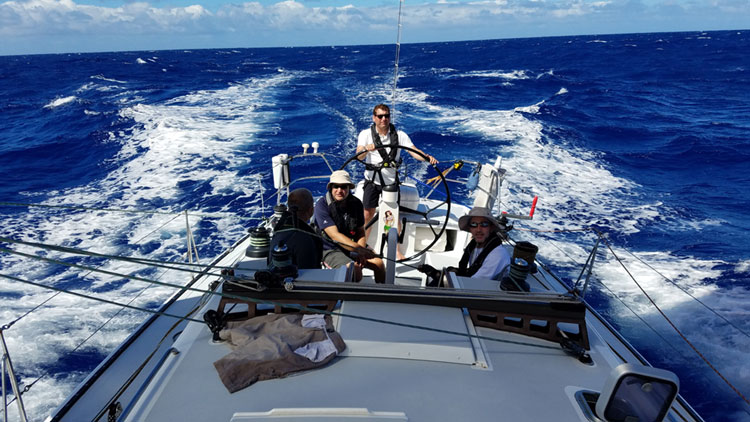 So what a year.  We had solid breeze all the way from California to Hawaii.  We had a fast, well prepared boat.  But most importantly we had a fantastic team aboard Hula Girl.  Everyone worked hard in some challenging conditions.  The first couple days were rad on beating/reaching in big breeze and lumpy seas.  Then the heavy air run with some fairly dark nights and a confused wave pattern from the systems to the south.  And it never let up, there was never a break or any down time.  Through it all, our whole team gave it their all, and it paid off. 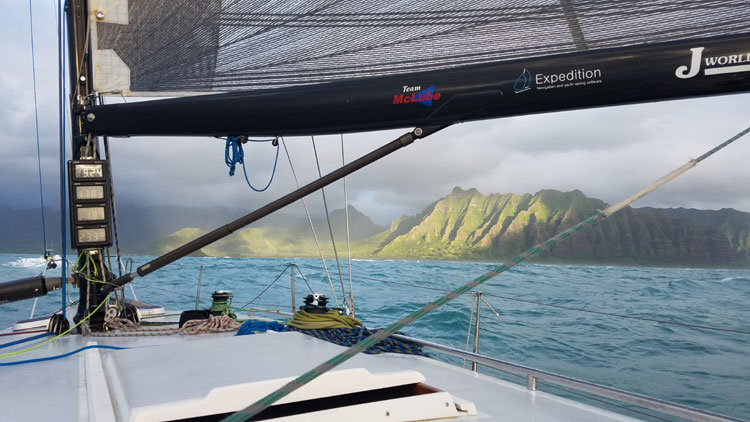 Morning arrival in Hawaii…  under 8 days from California, and class winners!

Not only did everyone perform well, but everyone was a true pleasure to sail with!  The team dynamic aboard was fantastic, and it was a real pleasure to sail with each and every one of the Hulagains:  Andreas, Brendan, Mike, Michael, Steven, and Chris.  A big thank you goes out to  watch-captains and J/World coaches Sean and Paul.

So that’s what I have in terms of a wrap up.   Nothing more to say for the moment.  A huge thank  you to all our supporters and fans who have been sending messages and congrats…  we really appreciate all the support!  Now I’m just going to decompress, clean up the boat, and it looks like we have a couple extra days in Hawaii this time, we got here pretty early.  Maybe I’ll actually have time to sit on a beach somewhere and look out at the Pacific with a Mai Tai in hand.  I think we earned it.

For those of you who want to join the adventures, we have our annual Offshore Racing Seminar (San Francisco to San Diego) in early October, then the Newport to Cabo Race next March.