Well well well, after a couple mild Cabo Races, it seems the 2021 event was ready for a change, maybe a bit pent up after 2020? From the outset, the forecast called for pretty solid wind.  The start had all the ORR fleets on one line together, so it was an interesting exercise with boats ranging from 40 to 100 feet in length jockeying for position!  Our J/World team got a clean start near the boat end of the line, then headed south on a close-hauled course, trying to work away from the coast and out towards the breeze at sea.  By mid to late afternoon, we had gotten to the wind which veered as we got seaward, and we were able to shift to the jib top, a powerful reaching sail.

Just after dark, the breeze started to shift around behind us. We didn’t want to push things with our new crew, so we took it a bit easy and waited until around midnight when the wind had lifted us even further and we could comfortably hoist the 4S spinnaker. And we were off. It was a dark night with a fair amount of cloud cover hiding the stars, and the seas were pretty disorganized, so overall it was definitely challenging conditions. 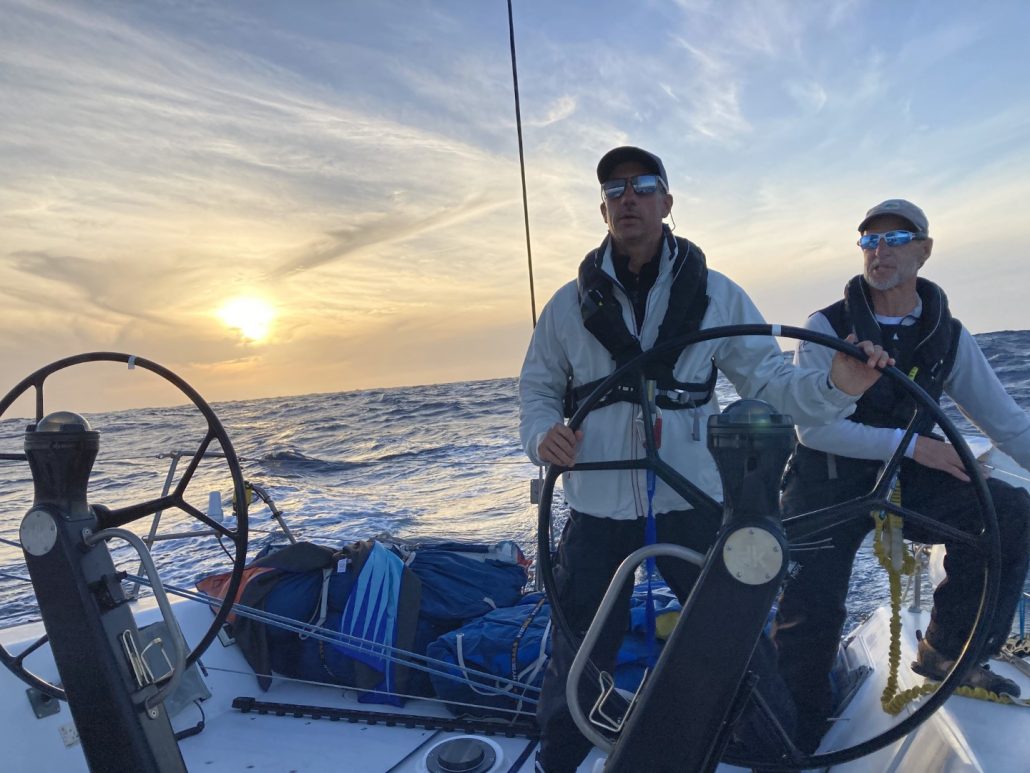 The breeze was stronger than forecast and seas were both large and disorganized, so it made for some wild rides. I believe of final speed record was around 19 knots, while surfing down one of those beautiful Pacific swells! But after all the stresses and strains of driving our boat and team southward, the breeze finally got the better of our trusty 4S that afternoon and the sail finally ripped. Blew the head right off, and tore down the edges. So scrambled, cleaned up the mess, then we set an even heavier 5S. That should do it, we thought, and continued the push south.

Spinnakers are numbered from 1 to 5. The smaller numbers denote larger sails built for lighter winds (and hence of lighter material).  Aboard Cazan, we had a 1, two 2s, a 3, a 4, and a 5. It’s pretty tough to blow up a 5. I mean, the sails are built to handle winds into the low to mid 30s.  So we were pretty surprised when our 5S popped after only a couple of hours in mid 20’s conditions.  And just like that, our race changed. With the realization that we were out of heavy air spinnakers, and had only three light and one medium sail left, we decided to throttle back for the evening so we all could get some rest and to fight (sail) another day. Hah, even with a jib up in 25 knots of breeze we were scooting along at steady 12, occasionally 16 knots! And the more forgiving sail plan let everyone focus on improving driving skills, without the scepter of blowing up a spinnaker looming over your head should you lose concentration and broach, so I think it was time well spent. 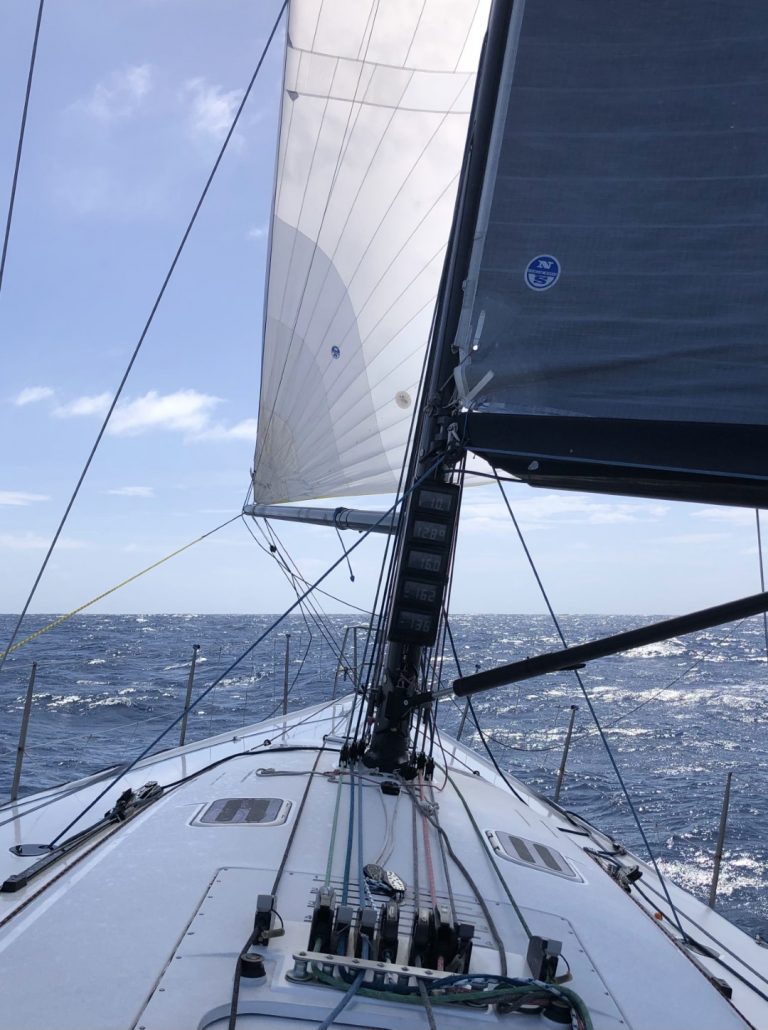 Monday morning we set the 3A spinnaker on the pole, and were off surfing again. We had a glorious day, sunny skies, blue water, and fun sailing. We knew we were pushing the limits of the poor 3A spinnaker, and alas, it’s number finally came up, and with a pop, our trusty sails was gone.  RIP to say the least. So unfortunately that changed our game plan. We had three light air spinnakers (1A and two 2S) but could only use them in the lighter patches. Luckily  Tuesday morning gave us a couple of opportunities for some light air spin sailing, but by afternoon the breeze had built again and we were resigned to finishing the race with a jib.

It’s now about 2am and we are 40 miles from the finish, broad reaching in towards the cape with (another!) pod of dolphins in accompaniment.  We set off as one of the smallest and slowest boats in a highly competitive fleet, so we expected most of the bigger boats to be well in front of us.  We had hoped to at least be close enough behind to gain some boats on corrected time, but unfortunately given the gear issues, that’s not going to be the case. But as we begin to smell land and start to think of a warm shower and a Margarita, I have to say that I am pretty proud of the team. We faced more than typical challenges over the past 800 miles, and each and every one of the crew rose to the occasion and did a fantastic job. It’s been quite the ride, one for the record books, in fact: Pyewacket set a course record of 1 day 20 hours…  that’s just insanely fast! 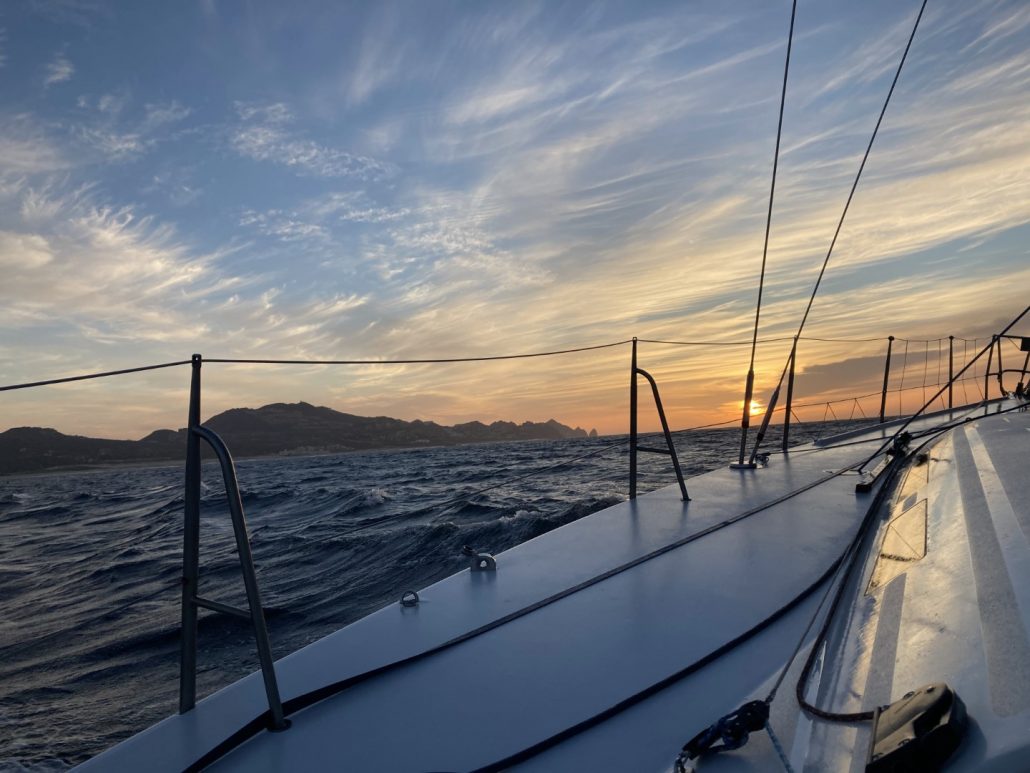 I have a theory that part of what make ocean racing so rewarding is the simple challenge of the exercise. A truly gratifying race should put you through a physical and emotional roller-coaster. You should be alternatingly overwhelmed then bored, exhausted then refreshed, depressed then elated. A truly great offshore race offers up all of this, and, given that criteria, the 2021 Newport to Cabo Race definitely did not disappoint.

I’d like to thank our great coaches David, Collin, and Randall for an excellent job, providing insights, sharing their knowledge, and keeping it all fun and safe. And a special thanks to our crew. I’m pretty impressed at how well everyone came together, worked hard, and all the while maintained great attitudes. Well done, and I hope I get to sail with you all again. 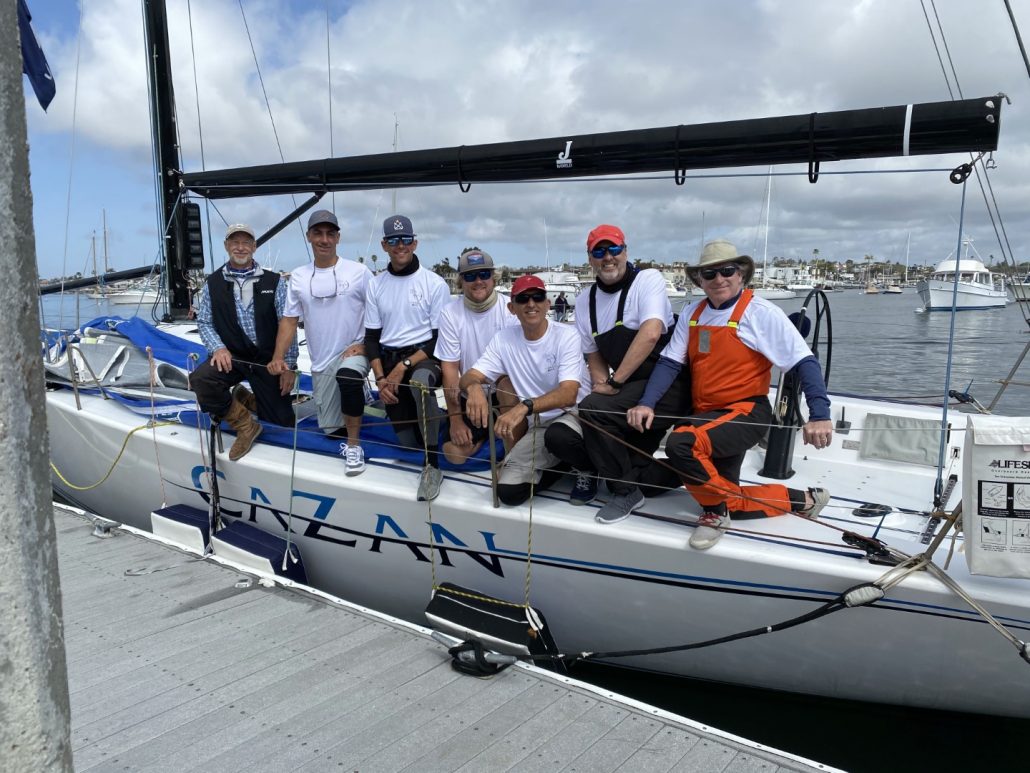 Ok, I’d better sign off now. A quick nap, then time to prepare for our arrival. Huevos Rancheros and a morning Margarita? Why not, I think we’ve earned it!