Well we promised you reports from Hula Girl during the SD to PV Race, but for some reason our auto-post from the boat during the race didn’t work due to some technical gremlins, so I’m posting the race reports here now, after the fact.  The benefit is that we get to splice in some great photos shared by the crew!

It was a great event this year, with some record setting runs down the coast.  Spinnakers were up before we left SD Bay and didn’t come down util we passed Cabo!  Hula was third across the line in our tight class, although we didn’t put enough time on the other 50s behind us to correct out that high in the final standings.

A huge thank you goes out to the awesome group of clients we had aboard for this event!  Next up is the 2016 Pacific Cup (sold out), then our Offshore Racing Seminar from SF to SD, and next winter we compete in the Newport to Cabo Race.  Contact us for info on any of the above. 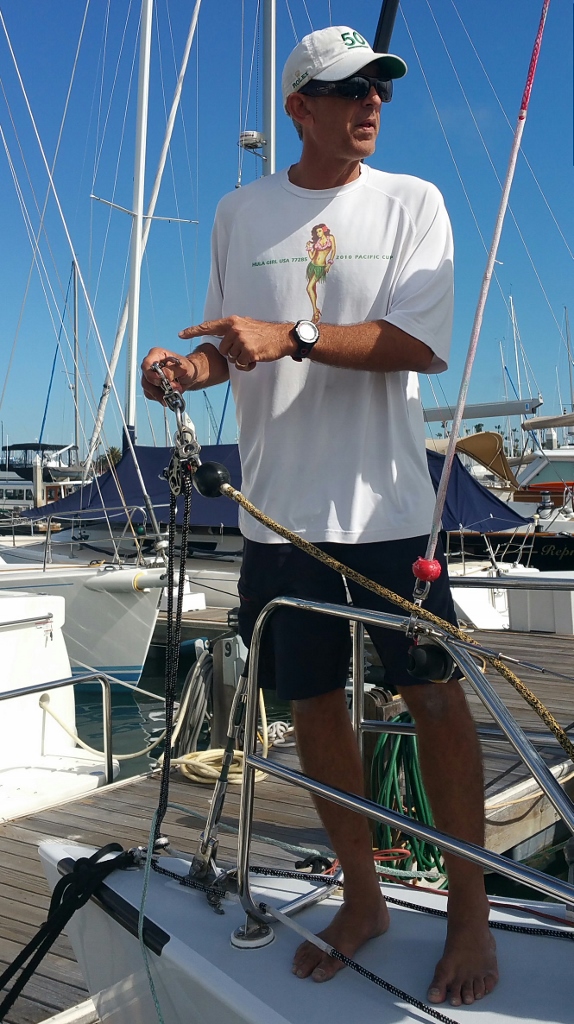 Ok, before I can get to day 3 of the SD to PV race, I’d better get you caught up on day 2 events.  It was a lot like day 1.  The best kind of Groundhog Day.  Beautiful sailing, 18-22 knots of downwind fun and one quick trip down the Baja coast!  Albatrosses, whales, dolphins, flying fish, and one sunfish.  Enough said…  anything further might be construed as bragging.  We just think we’re lucky out here.

Onboard Hula Girl, the only event of significance was a roundup at 2am on Sunday morning resulting in blowing up our 2A spinnaker.  Argh.  But with everyone rallying topsides, we shifted to the 4A and are saving the backup 2A for the lighter stuff we know is coming.  We’ve been seeing other raceboats, mostly from afar.  Sin Duda?  Hanna Ho?  Tonight we crossed gybes with Foil in close quarters, then Rio 100 gybed onto our line about 4 miles to leeward.  Boy, some boats just can’t seem to sail their own race and just follow others around the course.  Ok, so they blew by us to leeward and probably never even knew we were here (we saw them on AIS), but we all have our delusions that we choose to live with!

Everyone is doing a great job onboard the Girl.  20+ knots in strong following seas is a bit tough as a learning environment.  The boat is launching off waves and lurching into the troughs.  The noise can be staggering, and life aboard, well, it’s a bit tougher than just slipping out of bed and into a warm shower in the mornings.  Everyone had really been rallying, and we are seeing folks picking things up and getting more comfortable with all aspects of sailing the boat.  And this is a good thing, because a whole set of new challenges is waiting for us later today….

We are now on a port pole, a little under 100 miles from Cabo.  The breeze is just now dipping under 15 knots for the first time this race. And it’s going to get worse.  The forecast is showing a light and variable crossing of the Sea of Cortez, with a lot of confused air around Cabo right about the time we get there.  So the trick up ahead is going to be to get thru the uglies and into the light (but hopefully present!) breeze in the Sea.  Yep, pretty much a standard situation for a PV Race:  the closer you go to Cabo, the less distance you sail.  If you go out and around, it add on miles but there *might* be more breeze.  And this year looks particularly challenging.  We did look thru the sailing instructions, hoping that maybe – just maybe – they put a shorten course option in there and we could be sipping margaritas in Cabo this afternoon.  But alas, no such luck, so carefully thru the lightness we will go….  very much looking forward to Puerto Vallarta (way nicer than Cabo!).

Ok, that’s all for now… this concludes Part 1, A Quick Trip to the Cape.  Stay tuned for the rounding Cabo chronicles…

Wayne Zittel and the J/World Hulagains

Ok, it’s been a busy night and morning.  We are now on day 4 of the SD to PV Race aboard Hula Girl.  After a quick run down the coast to the tip of Baja, the pace started to back off, and indeed stopped for a short time.  We sailed into the night in a fading breeze with the old 2A spinnaker, having blown up our first string sail earlier in the race.  In the graveyard shift, the softening breeze gave up the ghost and the old speedo actually hit goose-eggs briefly.  But it was up with the windseeker, pronto.  This sail is a small, very light jib that is designer to fill at the slightest of breezes, conditions in which other sails collapse under their own weight.  And with that, the Gril started moving again…

The breeze came back after a brief intermission, but it was well out of the west, putting us on a dead run across the sea.  So it was up with the light air reacher 1A spinnaker, and we heated it up to build speed.  The angles towards Puerto Vallarta weren’t great, but we were moving.  We gybed a couple times as the wind shifted, and everyone did a did a really great job at keeping the boat moving.  The light conditions are extremely trying, and can be a real test of a team.  I was very impressed with the way the crew rallied to all the sail changes and kept focus when the going got tough.

Morning saw the breeze building and shifting back to the North.  We changed briefly to the slightly heavier 3A spinnaker, but of course the wind dropped again right then and we quickly went back to the 1A.  And just about an hour ago, we set our Code 0 since the wind has built and headed us.  So now we are pointing straight at the finish line 180 miles away doing 9-10 knots in flat water and clear blue skies.  And that was all before 9am!  Rush hour of a different variety…

So the big question aboard is who had wind last night, and who parked it, and for how long…  we are eagerly awaiting position reports.  We hope to have put some time on the three boats in our class behind us.  And maybe taken a bite out of the leaders?  Or did we get stalled when the others had breeze?  Impossible to know until we get some news…

Life onboard is fantastic.  Everyone is a real pleasure to sail with, and we are having a blast.   Bill is driving, Rafael is trimming,  Stacy just lay down to get some well earned sleep.  I’m going to head out on deck and enjoy our last day at sea…  we should be finishing early tomorrow morning!

Almost home.  The finish line for the 2016 SD to PV Race is just ahead.  We’ve covered a course 1000 miles long in the past five days, and as the sun is coming up in the Sea of Cortez, it’s a pretty sweet feeling. We averaged over 200 miles per day, with a couple checking in at close to 250.   Two boats from our fleet have finished in front of us, but we managed to put three behind us.  Third across the line with a team that, this time a week ago, had never sailed together, and had never sailed this boat is not too shabby.  I’m pretty proud of what the crew has done!

This is no slacker fleet.  Six 50s competing, stacked with professional sailors and veterans of many, many offshore events.  The simple fact that we could keep up with them was gratifying, even if we don’t correct out in front.  We have sailors from Virginia, New York, San Francisco, and Mexico aboard who did everything from driving to foredeck.  This was no skippered charter: everyone was an integral part of the team.  When the call came at 2am to get the 1A on deck, everyone was there.  And everyone did a great job.

The race?  Wow, what a fantastic run we had down the coast of Baja.  Seriously, some pure ‘chamber of commerce’ conditions.  Rounding Cabo only saw some brief calms, and the sail across the Sea has been great…  really shifty and puffy, but then if we didn’t have sail changes to break up the cockpit chatter, what else would we be doing??  We used almost every sail we brought;  5 different spinnakers, a couple of jibs, a jib top, a code 0, and a couple of staysails.  Right about now, everyone aboard is pretty good at sailing the ol’ Hula Girl!

Yesterday we sailed close by a giant manta ray….  huge, wider than the boat I think, some strange cross between prehistoric and futuristic in appearance in the blue blue water.  Another raceboat crept up behind us in the early morning, Deception, we believe, but we managed to make her slip over the horizon behind us again.  A small terrestrial bird took a rest aboard (and inside!) Hula Girl for a while, then flew on it’s way.  We blasted by a cruising sailboat after midnight at over double their speed.  I think we night have spooked them!  The moonlight last night was borderline unbelievable.  Sailing in the night in shorts and t-shirts is such a blast.  If we hadn’t had such great nights priming us for this last one, we might not have believed it.

So now 20 miles to the finish and it’s a fittingly beautiful morning.  We are done with the freeze dried meals.  No more erratic sleep.  I’ll have my last oatmeal breakfast of the trip, and a cup of coffee to get me thru the morning.  We’ll finish around 11am local time, and should be in the marina by around 1pm.  Perfect timing for a Margarita.  I hear they are pretty good in these parts.   But I’m not taking anyone’s word for it.  I’ll check it out myself.  And I hope the rest of the crew will join me.  It’s been well earned.

All the best and a happy morning to all of you!

Wayne Zittel and the J/World Hulagains