Hola from beautiful Puerto Vallarta! Well, folks have clearly put the hectic schedules of the holidays behind them and are focusing on “what’s next?” so our winter/spring schedule is getting BUSY. And we have all sorts of great things going on. We have a racing week on March 2, and the Banderas Bay Regatta is March 19-21. 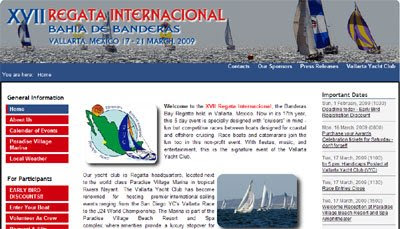 Our annual Banderas Bay Clinic/Regatta is sold out, however we have a J/120 and a Jeanneau 43 available for charter to qualified teams/sailors. The boats are available with or without J World coaches… contact us for details.

Our Spring Sea or Cortez Cruise (from Puerto Vallarta to Cabo San Lucas in early May) still has a couple openings, so for those of you looking to cruise a bit it tropical climes, this as a great opportunity. Seven days aborad a great boat with a J World Cruising Instructor. Muy bien!

We aslo have piles of Learn-to-Sail courses, Performance Cruising classes, and charter opportunities… plus more and more classes getting scheduled on San Francisco Bay.

What are you waiting for? Let’s get sailing!

We just got this photo from one of our recent students down in Puerto Vallarta, Mexico. Thirteen year old Michaela is doing a great job driving the J/80 with the kite up, the weather is beautiful, and of course there’s that whale in the background… man, there is nothing wrong (and tons oh-so-right) about this picture! 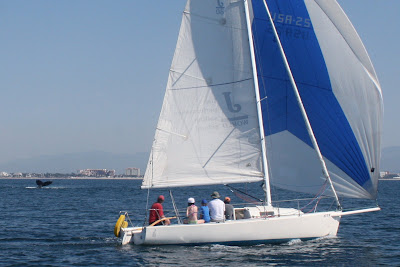 This is one seriously sweet place. Said it before, and I’ll say it again. Learning to sail, racing, cruising… yep, it’s perfect for all that.

Credit for the great shot goes to Nancy Fletcher, and thanks to Paul for sending it our way!

During one of our J/World Racing Weeks in San Francisco back some year and a half ago, we had some serious breeze-on one of the days. Against my better judgment, we set the kite (one of the big ones; we didn’t have a shy kite aboard that day), and we flew from the Bay Bridge to, well, way south. Jibing was out of the question. Here you go… listen to the boat hum!

Shortly after this clip was taken, we had a pretty good broach. In fact, you can hear me say “George, do me a favor…” he stops the tape just as I tell him to put the camera down, get the vang in his hand, and scoot back!

Skiny, the student driving, is a writer for Intersection Magazine. In his article he described the wild planing and subsequent crash as follows: “The only way to understand what happened next is to drive at top speed down a highway in a Lamborghini Murcielago… naked, with the windows down, and your body covered in Vicks Vapor Rub.” Indeed. Don’t know that I would have phrased it that way, but I think we understand what he means.

So the video has been up on You Tube for a year now, and has nearly 21,000 views?!? Seriously?!? For a crappy nine second clip… no offense, George (camera) and Skiny (Actor, Director), Spoon (supporting). What’s wrong with us sailors?!? Of course, I went on to spend another hour looking at random sailing clips of all varieties…

Anyway, thanks for your support, all you nut-jobs. Now get back to work.

No, wait, here’s another video. A bit slow at the start, but it’s a great finish. Been there / done that (see above). And I don’t know if they are nuts or heroes, as it must be pretty cold. As I write this on Jan. 5 in flip-flops at our Puerto Vallarta office, I readily admit I am getting softer in my increasing years. Some call it softer; I like to call it wiser.

Now that we have frightened off anyone thinking about learning to sail, just know that it’s not as bad as it looks… notice the smiles at the end of it? I don’t think anyone there was complaining.