J/World is proud to have one of the most famous sleds on the West Coast in our stables, used for our offshore yacht racing programs.  Hula Girl is a turboed Santa Cruz 50, designed and built the the Wizard himself, Bill Lee.  Formerly named Gone With The Wind, this boat has been continually updated and is now faster than ever before.  With a carbon rig and updated appendages (a “T” keel and carbon rudder designed by Bruce Nelson), there is simply no better SC50.

The boat has tremendous speed potential….  she is notorious for her 2003 Coastal Cup run, where she came into Catalina Island three hours before the next Santa Cruz 50 or 52, hitting a top speed of 27.5 knots and correcting out first in front of Pegasus, TP52s, and all other Class-A boats… and see below for Roy Disney’s account of the speed of these boats.

Most recently, Hula Girl was Paul Cayard’s personal boat.  After an extensive search for a well-sailing offshore boat, one of the most accomplished sailors in the world bought Hula Girl and performed an extensive re-fit prior to the 2008 Pacific Cup.  Said Paul in an email from the boat during that race: “…this thing flies!  With such a long and narrow hull the boat likes to sail low and fast.  At the moment we have 19 knots of wind and are surfing down waves at a comfortable 14.5 knots. It’s just incredible how responsive the boat is, especially as the breeze increases.”

Hula Girl completed an extensive refit in 2013, which included an updated carbon rig and extensive modifications.  She is the fastest SC50 afloat, and better than new!  In the 2016 Pacific Cup, we shattered the Santa Cruz 50 record from California to Hawaii, making the crossing in 7 days and 20 hours, averaging nearly 300 miles/day for the full trip.  She is the only SC50 in some 40 years of racing to make the trip in less than 8 days.

Beyond our usage for offshore yacht racing programs, the boat is available for charter in many events, including those listed below.  Individuals interested in chartering Hula Girl for any of these events (or an event not listed here), please contact us. 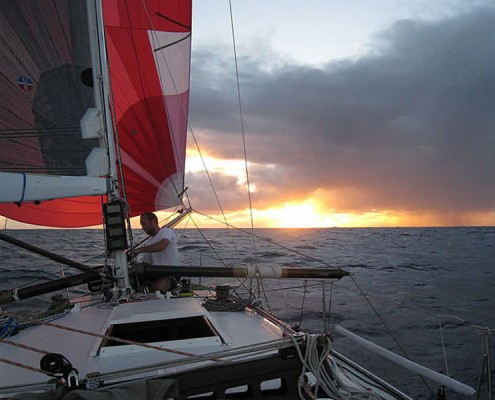 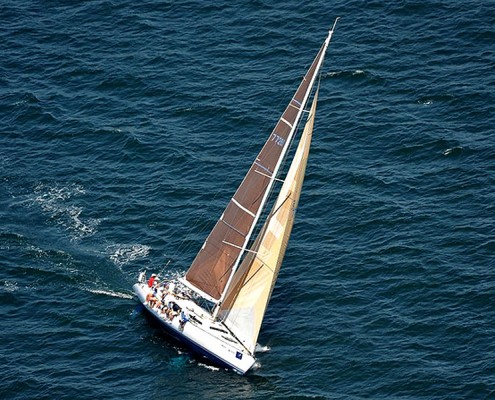 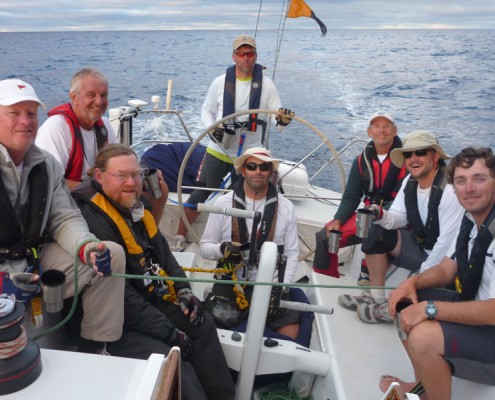 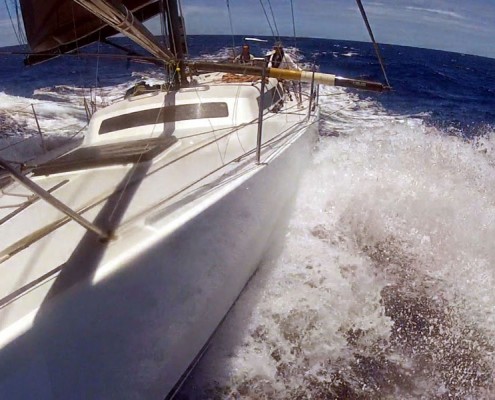 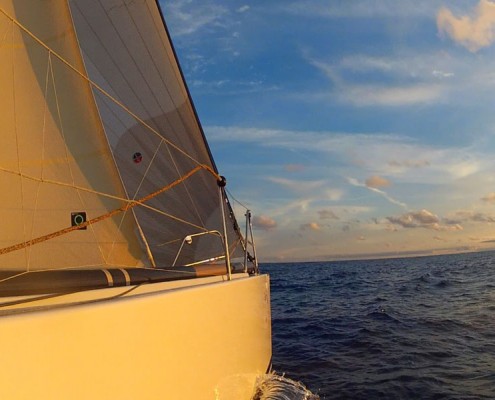 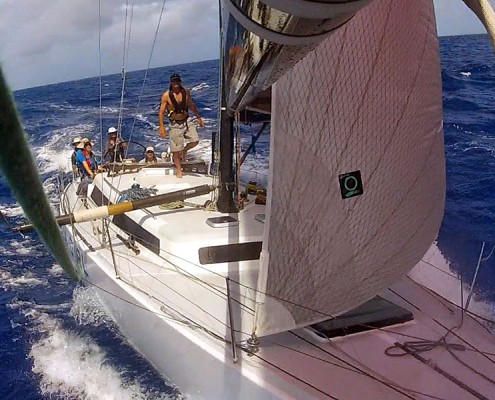 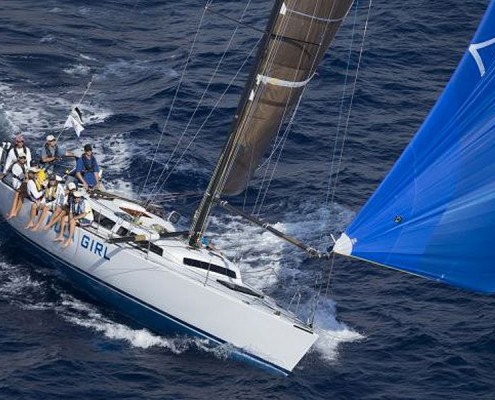 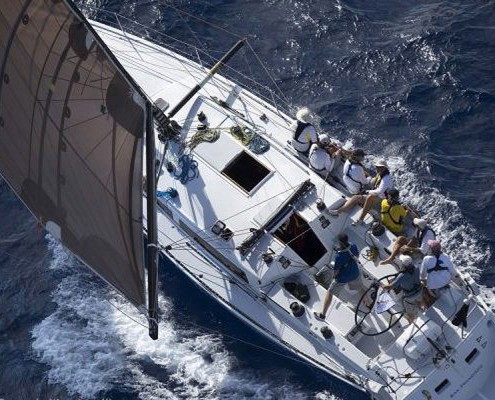 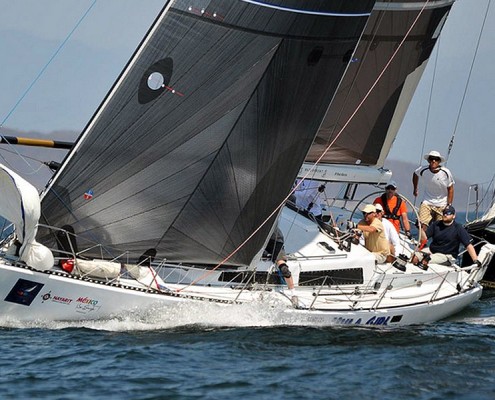 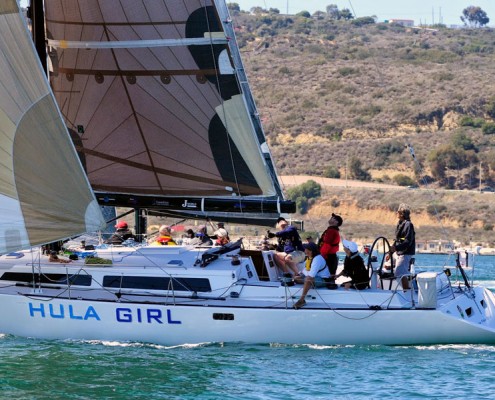 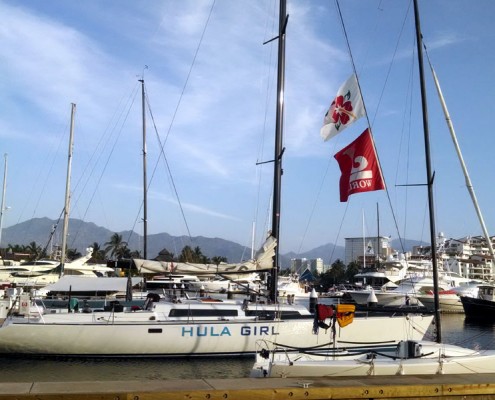 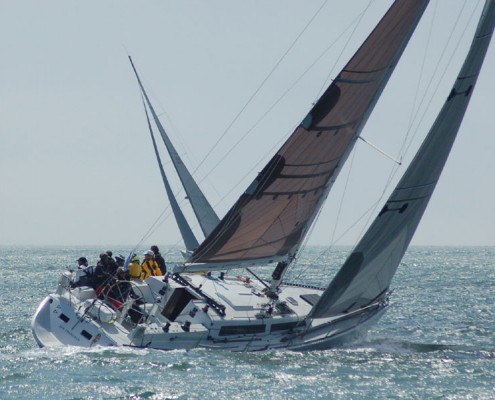 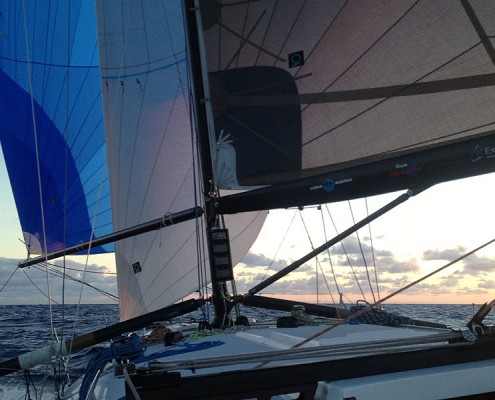 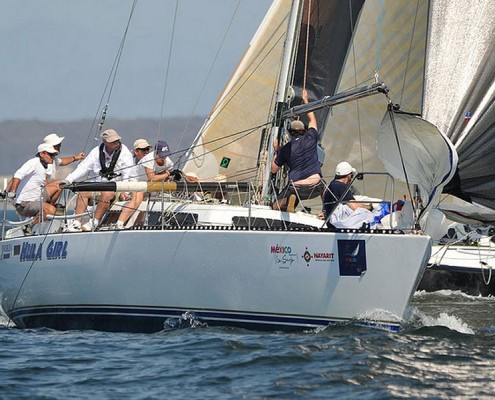 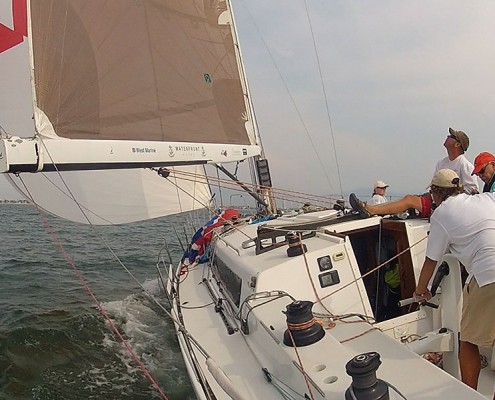 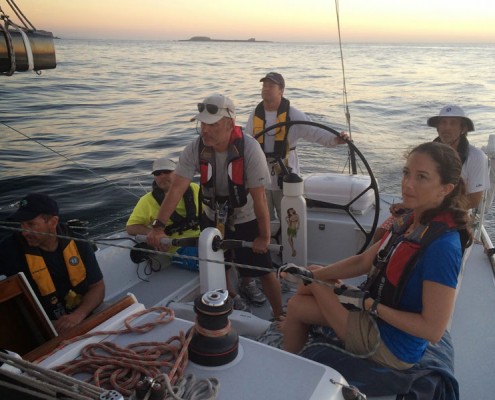 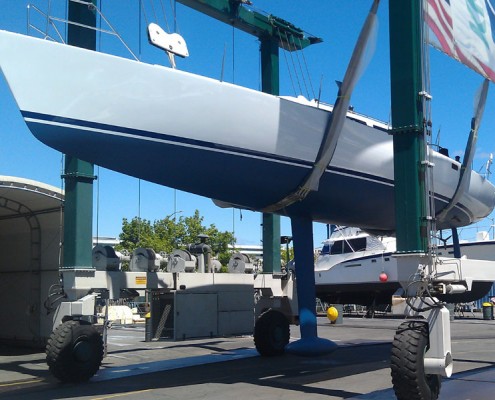 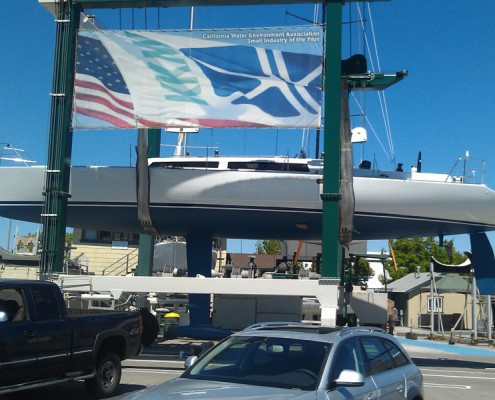 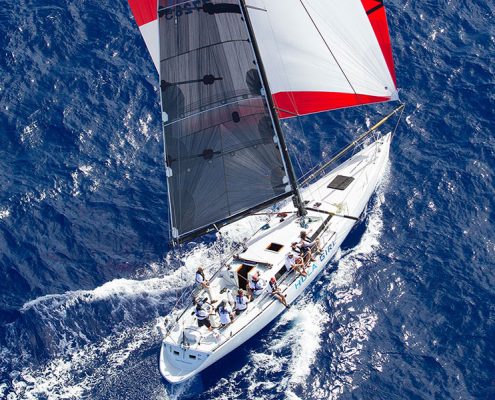 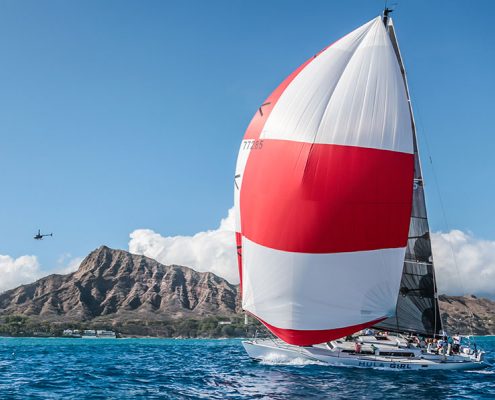 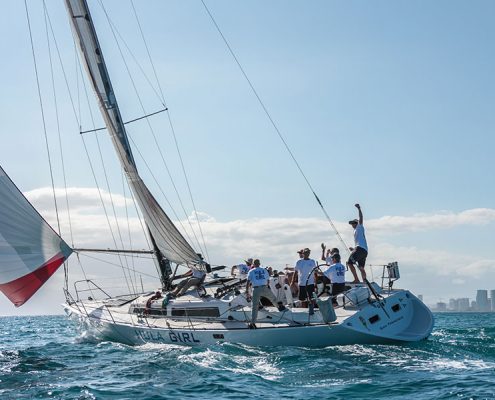 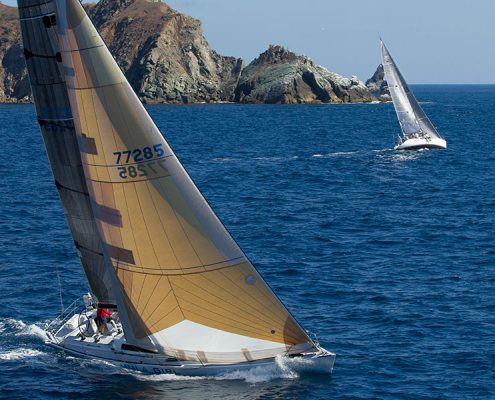 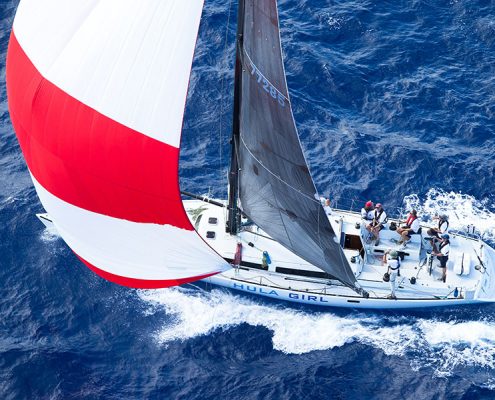 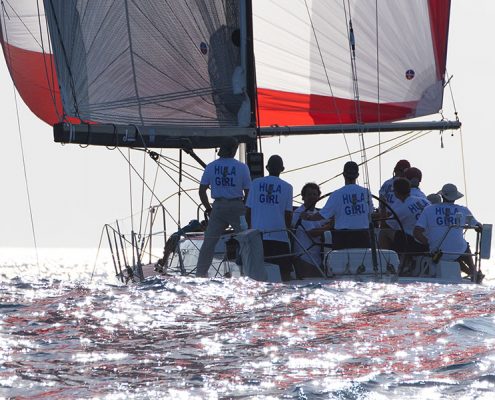 About Hula Girl and the Santa Cruz 50

The SC 50s are known to be about the fastest 50 footers around.  Their long narrow hulls and ultra-light displacement makes them a real pleasure to sail.  Here are some great testimonials about the boats:

From an Interview with Roy Disney
Sailing World Magazine, 2003

RD: It’s hard to say. If you want an instantaneous thrill-meter reading… we always keep the averaging on the speedo turned way up.  But on the Santa Cruz 50, when we’d turned it down, I saw 28.5 one time in the middle of a moonless night when it felt like I was going straight down.

SW: Were you a little nervous?

RD: I was scared s–tless.  But it was so dark that we had to turn the bow lights off because it gave people vertigo.  All that was there was the compass and one little teeny old B&G with numbers about half an inch high.

SW: Did you believe what you were seeing?

RD: Well it went from 12 to 18 to 28.5 about as fast as I can tell you that. Then started to subside again. It really felt like we were going straight down a cliff or something. We called it the black hole.

At 0830 this morning we had 50 miles to go and we had just got finished dealing with the morning squalls. They were pretty mild this morning. We were hoping for a bit more really, to give us a chance to pass the Raindrop for first to finish. Raindrop is the only boat ahead of us. They are just 36 feet long, racing in the double handed division which started about 5 days ahead of us. They have been out here for a while! Maybe they deserve to the honor of finishing first.

We had a good night including some white knuckle driving by yours truly in 28 knots of wind with the A4 up. Boat speed was a pretty steady 18 knots with peaks at 20. Again, I am impressed with how well this boat performs!

Amazingly, we had no major damage onboard during the race. Not a torn sail, not a broken batten, never got kelp on the keel or rudder. We did have some normal wear and tear and we did break one masthead spinnaker halyard that required Robbie Kane going up to the top of the mast to drop a new one in 20 knots of wind. He is a “pro” with a great future!

Molokai is in sight off to our left as we are aiming at Coco head on Oahu. The wind is just 14 knots as usual at this time of the morning. It will build a bit as the morning goes on.

With the finish to our voyage hours away, I am thinking about how this was just a dream a year ago. I have to admit, it was a lot more work and time consuming that I thought it would be. That was mostly my fault as I wanted to modify and improve the boat which created a huge amount of work for my friends. But the boat is a nice boat to sail.

My goals with this project were: to share a sailing adventure with my children, that none of us will ever forget. Also, the goal was to expose them to the great world of offshore sailing, the beauty of nature at sea, and the teamwork and camaraderie that is crucial to a winning team. Along with mine, I took four other outstanding young adults, all of whom thoroughly enjoyed the experience and have gained a lot out of it for sure. Mission accomplished…

…So this afternoon, we will finally taste that Mai Tai, the one we worked so hard for. It will probably taste pretty good. Might have to have a second one just to make sure of how good it is.

I am happy with myself for making this happen. For sure it cost some money, and for sure it took a lot of time, but as they say in the commercial: Priceless!

When we finally rounded the island and headed downwind back toward the city, we popped up a sizeable 3/4 oz. spinnaker in a steady 25 knots of wind. When the chute set, the helm suddenly went light, there was this incredible surge of acceleration, and a tremendous roar of noise silenced all conversation as the boat began to lift. I was in a state of near paralysis. I had never experienced anything like this on a boat this size, and was totally unprepared for what ensued. When I glanced at the VDO instrument repeater on the mast, I could not believe my eyes: 16, 17, 17.5, and finally a peak at 19+ knots. The Sat Nav (this was pre-GPS) corroborated these readings. These were not momentary blasts while surfing down swells either. Indeed, the boat would actually accelerate up and off the crests, not just down them. A rooster tail was coming off the stern, and the owner must have sensed my disbelief when he turned to me and said “now you know why Bill Lee says, ‘fast is fun’.”

There are no other programs in the world like this.  Period.

The offshore programs put together and managed by J/World are absolutely unique in the world of yachting.  You are a truly active and integral member of an actual racing team.  We don’t load the boat with clients to the point where no one gets to do anything.  We won’t just park you over a grinding pedestal  We aren’t just  taking you for a ride like so many big boat programs.  You are sailing the boat.  You get to drive, trim, navigate…  whatever your interests are, we’ll be sure that you get to exercise that muscle.

For most programs, we limit enrollment to six clients.  With three coaches aboard, that’s a 2:1 ratio which means everyone aboard gets a ton of personal attention from our extremely experienced staff.

These programs are fully turn-key, and managed by a team of sailors who are hand selected for both their extensive sailing background, and their ability to coach well and share their knowledge, expertise, and enthusiasm with others.  The afloat staff is supported by our expert shore team, insuring that you have the time of your life.

The boat is owned by J/World.  This is crucial…  it is not some charterboat that we tap into for occasional use.  It is our boat, campaigned regularly by our team.  To you, this means that the equipment is on absolutely top condition, the boat is maintained to the highest competitive standards, and the safety equipment onboard is second to none. 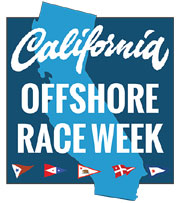