Ok. I’ve seen a lot of things around the docks, but this was new to me. One morning last week, instructors headed down to the boats to get the ready for the day… you know, the usual preparations: open the hatch-boards and let the boats air out. Setup the horseshoe rings. Dry the spinnakers. Check the lifejackets. Ice in the cooler. And coax the snakes out of the rigging…

Hold on, say what?

I was in the Bay Area when Josh and Eugenie relayed that apparently a critter had slithered it’s way up to what it felt was a safe perch. I really thought they had been working in the sun far too long, but they sent me this photo: 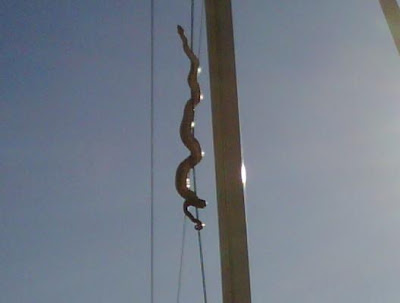 Yep, that’s a snake in the rigging of our J/80. Now this isn’t your run-of-the-mill garden snake… we’re talking boa here. So this critter managed to slide all the way down the dock, onto a boat, and up the rig?? Pretty tough snake. I’ll be proud wearing his hide on my belt. Whoa! Back off, just kidding of course… our trusty faithful staff and the great folks at Paradise Village managed to get the reptile out of the standing rigging and made sure the snake was returned to it’s natural habitat (the golf course). Easy, just kidding again… man, can’t anybody take a joke these days?

Not sure what the snake was doing up there… Josh mounted some theory about the snake making the mistake that it was discontinuous rigging and was just going aloft to take a couple turns off the D2s… or some such nonsense (but it WAS light the next day… hmmm…..). But then again, maybe this whole thing was a practical joke…. does anybody know what Jeff was up to that night???

Ok, and if that wasn’t crazy enough, our good friend Jim sent us these pictures of a waterspout taken from the deck of his Punta Mita condo the same week: 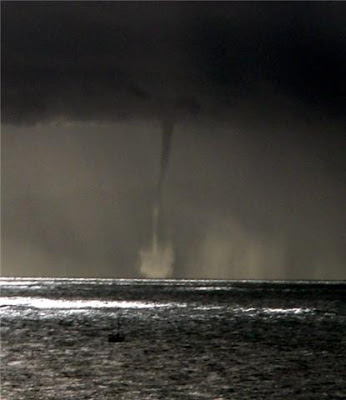 In all my years down here, I have never seen anything like that!

We had some strange days (weather wise) down here towards the latter part of last year, but wow, Mother Nature is making up for it. I seriously couldn’t dream of better sailing conditions than we are having now!

Time for some seriously good sailing…

Playing For The Other Team Hola Hula Girl…
Scroll to top