Well it’s about 4am California Time.  I’m not sure what time it is out here since we are traversing a number of time zones (with nothing in them) , but we are getting close to Hawaii time.  So I guess it it’s a little after midnight locally.  The graveyard shift might be in the cockpit sailing the boat, but is’s far from a grim affair out there.  The big moon and wild clouds play across the course of the 2016 Pacific Cup in a spectacular way. 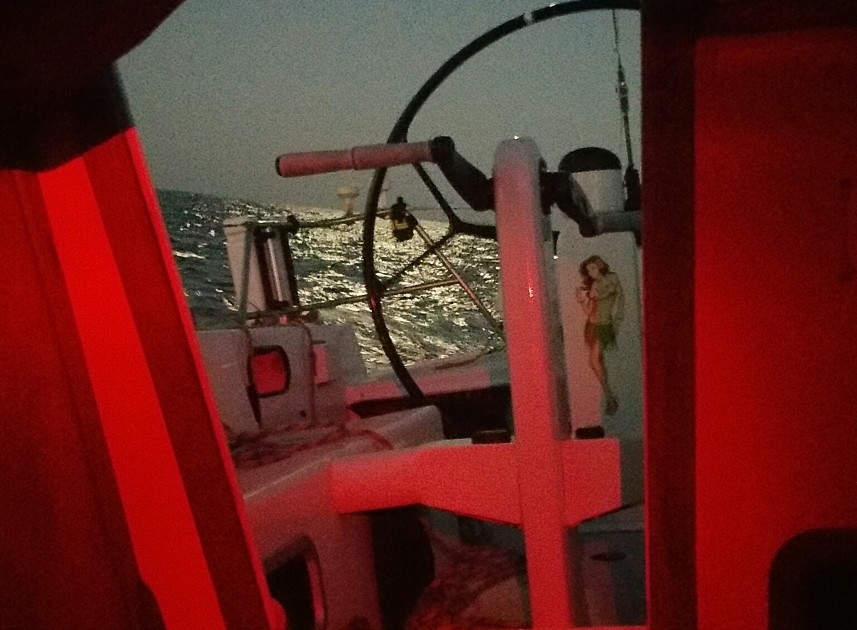 So here we are, about five and a half days into the race from San Francisco to Hawaii and things are great out here.  We have had good breeze the entire year, and of the more than a dozen Hawaii races I have done, this is probably one of the most ‘typical’ in that there were no terribly large weather anomalies that we had to contend with.  This is pretty close to the textbook thing.  Plus, it’s fast.  If things persist as forecast, we should be finishing early Friday.  That’s less than 8 days to Hawaii.  That’s really quick for a 50 footer.

Everyone on Hula Girl has been doing a great job.  We’ve had a small amount of boat-work, but nothing rushed or unplanned.  You know, the typical staysail up and down thing, a couple of spinnaker peels, one douse for a small preventative repair, and so on.  The driving aboard has been getting better and better, despite the challenging conditions:  first off, it gets breezy, solidly in the 20s, up over 30 at times.  Secondly, the wave pattern is really very erratic.  A couple of tropical disturbances to the south have kicked up some swell energy coming from the wrong direction, so it is a bit of a washing machine.  Makes surfing and driving tougher than usual.  And finally, the breeze, while present, is not terribly consistent.  There are some pretty big shifts and variations in velocity around the persistent (but mild) squall activity out here.  So all in all, a challenging environment in which to hone one’s skills at ocean driving, but like I said, everyone is doing fantastically.

In fact, we have been doing well enough to maintain our lead and continue to be winning our division.  We are on the long port tack gybe towards the islands some 600 miles away right now, and we like our position relative to our competition, so now we just need to work extra hard and not have any major problems!

Ok, enough of this typing.  I came down here to pull the latest weather reports, but then got to feeling guilty about not sending in an update earlier in the day.  But now I really want to go sit in the cockpit and enjoy the evening,.  The moon plays across the water out in front of the boat and it feels like you are speeding into a sea of a million silvery fish.  Hula Girl, our trusty steed, has been performing flawlessly and just loves this stuff.  Brendan is driving, Paul is the on deck watch captain.  Steven is trimming.  Michael is grinding.  And I’m just going to go out there and soak it all in.

See you all tomorrow…