Hey all friends and family, just a bit overdue in getting out a report from onboard Hula Girl in the 2015 Transpac, but here we go.

So after our slow start and getting pinned in the funk- wind plagued southern lane on the way to Hawaii, we finally managed to get out and into the Trades. And man, is it nice. We have had beautiful days of great sailing in winds mostly 18-22 knots. The squall activity has been mostly light, with the busiest night having been Friday night. But even then, the mid to high 20s what the breeziest we saw. A reasonable number of boats finished today, with a lot more arriving tomorrow. The Monday starters (smaller boats) and Saturday starters (biggest, fastest boats) did not get the brutal, drifting conditions that our Thursday starters had, so our gang is coming into Hawaii a bit behind the masses. They usually try to time things so that we all get there about the same time, but that didn’t happen this year. 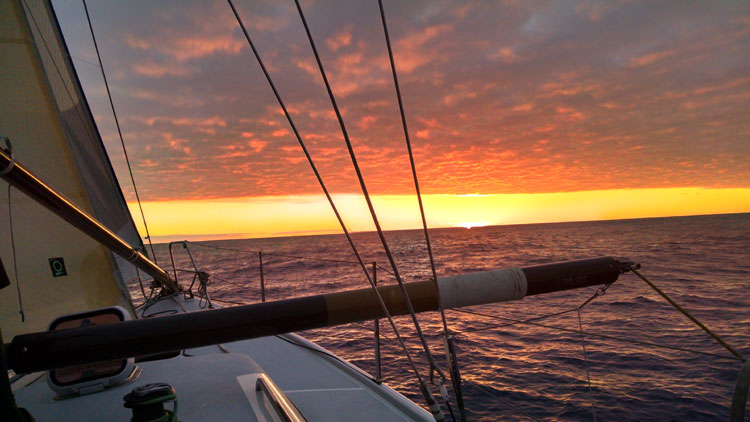 We here on Hula Girl are buried well behind our fleet leaders, but we are determined to catch our closest competitor, Adrenalin. At one point, they were 33 miles in front of us, but we have been reeling them in. At roll call this morning, they were just over 8 miles ahead. So we’ll keep pushing to see if we can take them before our finish on Tuesday. So our majority Canadian contingent on board presented some fuzzy math this morning, converting the nautical miles and times and lat/lon positions to Canadian equivalent. They attempted to declare Hula Girl the winner of the 2015 Transpac, but I think we’ll have to take a closer look. They definitely need to show their work on this one.

Regardless, it’s been a hoot. We are all having a blast, but it has also been a long one and I know we are all looking forward to getting to the Islands! Tonight is just perfect. It’s about midnight out here, mid-Pacific. The moon is up over a shimmering sea. The clouds are sparse, and the weather warm. It’s the first night I have noticed that everyone is in shorts and short sleeves in the cockpit. In the darkness, there have been a couple birds circling Hula Girl as she rushes towards Hawaii. Maybe they are picking off the fish as she spooks them and they dart out of her path. The water itself is full of phosphorescence. It’s a bit tough to see with the bright moon shining down, but later, after the moon-set, you can see the brightness in the water, especially where Hula Girl hurls the ocean out of her path and in the smooth sizzling wake she leaves behind. Down here at the nav table it is quiet with all everyone below decks sleeping. Although ‘quiet’ is a relative term: the water tears by the hull in a rush with a rolling hissing noise. It sounds like a windy night with heavy rain. Occasionally, the boat grunts or groans when a loaded sheet is eased or trimmed, but then the water noise takes over again.

So we have less than 400 miles to go. Tomorrow should be our last full day out here, arriving in Honolulu on Tuesday, so I’ll have time to get one final report off to you all. Thanks for all the positive thoughts and well-wishes that we have been getting from our friends out there! Have a great slumber tonight, and maybe dream a bit of this life at sea. It’s pretty sweet.