MEXORC is six days of buoy and short distance racing in Banderas Bay. The event includes most of the boats that raced into town from California, some local teams, and a number of boats who come up from Acapulco. Run every two years, this event is always a huge production, and this year was no exception!

So the Tsunami…
The wave rolled through Banderas Bay on our practice day kicking up some pretty wild currents. There was a river running across the harbor doing an easy three knots which had the docks throwing up bow-waves! Then the water went up, then back down, a swing of about three feet in a 15 minute window… strange things ’round here.

And the Dignitaries…
They really pull out all the stops for this event, and this year they have outdone themselves: the regatta was kicked off by the President of Mexico! But not only was President Calderon present for the first day of racing, but on the final day he was watching racing from the committee boat, running down a long line of sailors and locals along the embarcadero shaking hands, and (of course) politicking away with speeches. 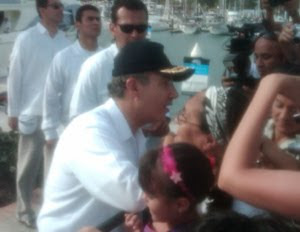 Yep… that’s El Presidente, right after he ambled over, shook my hand, and congratulated us for a great pin-end start and nailing the first shift in the final race… Well, ok, that’s only part true…

And the Parties…
Nightly parties with dinners and hosted drinks for all are just the norm around here. I can get used to this. The Tuesday night event, hosted at the private Las Caletas Beach (including water taxi rides home) was a truly special happening…

And Then They Were Off….
Oh yeah, the racing…. what can I say, it’s nearly perfect. Kimball Livingston of Sail Magazine described it as follows:

Regata Copa México [MEXORC] opened on Sunday out of La Cruz de Huanacaxtle, on Bahia de Banderas, which I will say for the umpteenth time is one of the best places in the world to sail.

Got that right. And this year was no exception. The first part of the week was classic MEXORC racing: clear skies, and hearty afternoon thermals stepping up every afternoon. Midweek the weather pattern shifted and we had some slightly more, shall we say ‘variable’ winds (ok, there might have been some more choice words uttered by some tacticians when the 80+ degree shifts rolled thru the course!). But overall, it was outstanding.

Josh and Eugenie were the coaches aboard Bob Musor’s J/130 Sceptre. We also had four students aboard. Everyone on the team did a great job and are to be commended for tacking such a challenging event! People swapped positions and worked on whatever skills they were interested in polishing for their local racing. 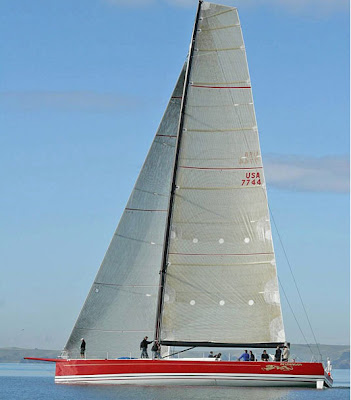 Barry was racing onboard the brand-spanking-new 70 foot Pendragon VI (above). Competing in her very first regatta provided a bit of a shakedown-under-fire, but she showed some bursts of speed as they wound her up towards the end of the week. 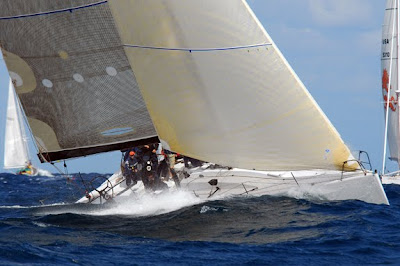 I was the navigator aboard the Transpac 52 Flash (above), with Quantum’s Jeff Thorpe calling shots and my good friend (and USCG insider) Kevin Sullivan on the pointy end). The crew were mostly San Franciscans, but many aboard hadn’t sailed on that boat together before, but we still rallied to the cause. All things considered, the third place overall that we ended up with wasn’t too bad.

So that’s the MEXORC report. There’s more on Kimball’s blog. We’ll do it again in two years.

Can’t wait that long? How about this:

The BANDERAS BAY CLINIC and REGATTA is our most popular event this time of year. Come join us for an three day clinic/workshop aboard our J/80s, then race in the Banderas Bay Regatta! This is a great way to sharpen your skills and have a really fun time doing it. Come as an individual or a group.

We also have boats available for charter for the Banderas Bay Regatta, including a J/80!! So come on down with your team and get ready for some fun…

Kimball Livingston of Sail Magazine says of Banderas Bay: “I will say for the umpteenth time [it] is one of the best places in the world to sail.” Come check it out for yourself.

Our annual Spring J/105 Racing Clinic will be held on May 22-23 out of our Jack London Square facility. This event is open to both individuals and full teams. Boat owners who wish to attend with their own boats can do so for free! For full information, please contact us or click here.

We are offering one of our combo course comprised of out Performance Cruising class coupled with a Three Day Liveaboard Cruising course in San Francisco on April 5-11. This is a tremendous value and a great way to take your skills to a whole new level. You will sail on boats from 26 to 40 feet, and cover everything from advanced sail trim to diesel engines… Contact us for more info.

The Racers Have Come To Town… Boatshow Preview….
Scroll to top